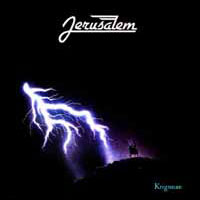 Additional information:
There were 2 videos made from this record, “It’s Mad” and “Constantly Changing”. “Constantly Changing” was actually meant to be taken out from the record at first but Jerusalem changed their mind and decided to keep it on the record. Both Videos were produced by Jan Petruhs for Prim and Benson Company/Nashville. First on 16 mm film and then transformed to video format. These music videos became the first ever shown on MTV by a Swedish rock band. Musicians on this record were Klas Anderhell, Dan Tibell, Peter Carlsohn on bass (Anders decided to stay in Gothenburg and left the band when they moved to Sollebrunn in 1980) and Ulf Christiansson. This record became the bands first real break-through into America and Europe.

It was produced by Andy Kidd (Belfast, N. Ireland) and recorded at Supreme Studio Stockholm. The band asked the record company to give them free hands to record any time they wanted and to have full access to the studio for 3 weeks. Before, it was basically a story from 9 till 5 with a producer and engineer that wanted to work like that. But as you know creativity does not always show up on schedule… One time when creativity did show up, Ulf and Andy put Ulf’s Marshall stack in the elevator at 1 o’ clock at night and the amp on full power, without knowing the gardener was sleeping on the top floor with his family. You can just imagine what he said when he came down into the studio at 2 o’ clock in the morning with sleepless eyes and Ulf´s guitar ringing in his ears.